I've previously mentioned getting a "First Christmas Together" ornament that is so important to commemorate your first Christmas season together as a husband and wife. I found another beautiful option that is available with a slightly different style. 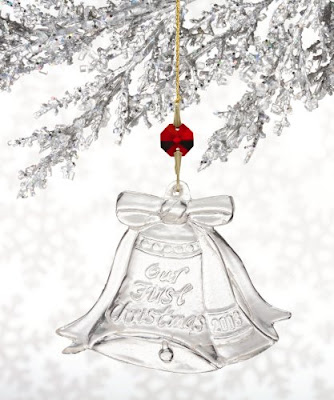 Be sure to get your Marquis by Waterford 2008 "Our First Christmas" Ornament.

Here are a few quotes I'm pulling out of the May 19th, 2008 issue of Us Weekly. I'm not usually fan or frequent reader of celebrity-watch rags, but I was clearing a few old magazines from the reading shelf and I thought I'd save these here for posterity.

The only reason to get married or to get together with someone is if they're going to add something to your life.

You need a sense of humor and to be able to ride the waves.

--Natasha Richardson on her 13-year marriage to Liam Neeson

We go to dinners together, hang out at friends' houses... We just like being together.

I recently posted a quote from Will Smith that I think is the best succinct advice for a long-lasting marriage.

Unidentified Bride
Originally uploaded by George Eastman House
Something about old time wedding photos can really bring out certain memories and feelings. Here is a completely unknown woman, but she's made it into public photo archives and is captured on what is possibly the greatest day of her life.

The Commons on Flickr shows you hidden treasures in the world's public photography archives, and you're invited to help describe the photographs you discover, either by adding tags or leaving comments.

It is likely possible to capture this kind of style with some of your wedding photographs. It will give your memories an extra special touch. If you are interested in something like this, be sure to speak with your photographer ahead of time.
at 9:56 AM No comments:

I just posted about the movie Rachel Getting Married, which I thought I'd seen a commercial for the other day. But perhaps on second thought it was actually a short clip from Bride Wars that caught my attention. They're both wedding movies and Anne Hathaway is in both. It would be easy to get confused.

Okay, that looks funny. Very funny. Bride Wars doesn't come out until next year. Remember to save the date!

I just caught a short glimpse at a promo for this movie the other day and thought it would be interesting.

When KYM (Anne Hathaway) returns to the Buchman family home for the wedding of her sister RACHEL (Rosemarie Dewitt), she brings a long history of personal crisis and family conflict along with her. The wedding partys abundant cast of friends and relations have gathered for an idyllic weekend of feasting, music and love, but Kym—with her black-comic one-liners and knack for bombshell drama—is a catalyst for long-simmering tensions in the family dynamic. Filled with the rich and eclectic characters that have always been a hallmark of Jonathan Demmes films, RACHEL GETTING MARRIED paints a strikingly perceptive and sometimes hilarious family portrait. Director Demme, first-time writer Jenny Lumet, and the stellar acting ensemble leaven the drama of these difficult but compelling people with wry affection and generosity of spirit.

Anne Hathaway is a pretty good actress in what I've seen, and this is an interesting dramatic role. From the trailer, it looks like the film was shot on the same sort of camcorder you'd see at a wedding anyhow. I thought to post about this movie tonight because I was reading through Roger Ebert's list of the best films of 2008 when I saw his review.

"Rachel Getting Married" After seeing this film, people told me, "I wanted to attend that wedding" or "I wish I'd been there." It's that involving. Jonathan Demme doesn't lock down one central plot, but considers the ceremony as a wedding of close and distant family, old and new friends, many races, many ages, many lifestyles, all joined amid joyous homemade music. His camera is so observant, we feel like a guest really does feel. Rosemarie DeWitt as Rachel and Anne Hathaway as her sister generate tricky sibling tension.

Well, that's worth a trip to the video store at the least. I'm not always sure about movie reviews or reviewers as I've not always agreed, even with the esteemed Mr. Ebert. But for the movies in his list that I have seen (comic book hits The Dark Knight & Iron Man), I'd say he is spot on. And with such a unique perspective on this treatment of a typical wedding, you really shouldn't miss it.

Also: The Soundtrack is Currently Available...

I wanted to post a quick mention of a quote I heard during Barbara Walter's interview with a celebrity on how he manages to stay married.

I respect Will Smith a lot for his great movie career and enduring musical career. But he has hit on a very good point here that needed to be emphasized. In more detail, what he went on to say was that in his first marriage divorce was always an option. And that is what ultimately happened. In his current longer-lasting marriage to Jada Pinkett-Smith, he stated that divorce is not an option for him. Marriage is hard and when faced with the hard work OR the easy option of divorce, divorce wins. It's something simple yet important to think about if you want to make your marriage work.

"Our First Christmas Together" Ornament

Having an ornament to commemorate your first Christmas together is a great tradition that will be saved as a memento for many years. Every December, as the ornaments are placed on the tree you can reminisce about your first holiday season together.

Here's a good example that is currently available for a great price. This is the 2008 Lenox Our First Christmas Together Ornament available right now for $9.95 (and free shipping with code). 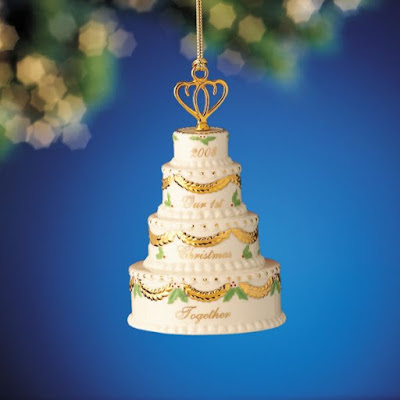 A four-tiered wedding cake is decorated with holly leaves and berries in this keepsake ornament. Two interlocking hearts from a crown-like cake topper. Each layer has gold wording that complete the commemorative inscription: 2008 Our 1st Christmas Together.

Read more about it and the review on the SlickDeals.net Forums or go directly to Lenox.com. And don't forget to use the free shipping code Free Shipping with code 4728697!

I found out the Lenox is available directly from Amazon.com.

Order yours quickly in time to hang on your tree this year.

First Kiss At the Altar

Want to hear about a soon-to-be-married couple setting a good example for their students in an extreme way?

Won't kiss on the first date? How about waiting until marriage?

The following should load recommended songs for weddings. I'd like your opinion on their recommendations.

Email ThisBlogThis!Share to TwitterShare to FacebookShare to Pinterest
Our Labels: music, reception

I am building a short list of external links for HappyIsTheBride.com, to list directories of useful resources for brides and grooms planning their weddings. One of the eventual choices to cover for your big day is the photographer. Check out the Wedding Photography Directory (WPD©).

To get started from their home page you can either choose your state from the drop down menu or from the links at the bottom of the site.

You can also browse and read articles with advice for choosing your photographer, scheduling your wedding day, photography rights and wedding photography costs.

Planning Your Wedding On Halloween

This time of year is not the traditional time for weddings, although some people prefer the unique theme...

But for a spring wedding it might seem like wedding planning is a long ways off. Well, I want to stress that right now is the time to really get cracking on your initial plans and preparations. It may seem like you have several months, but those months will be filled with so much holiday preparations; Thanksgiving, Christmas or Hanukkah or Kwanzaa and New Years. At the end of it all, you will find yourself in the middle of January with nothing done! So at least get started on preliminary guest lists, location scouting and honeymoon planning.

Bonus: Here's a Halloween / Wedding joke that I was sent today.

What do they call two spiders that just got married?

Be safe and have fun!

See Us Magazine for Star Wedding Pics. Realize quickly that their budgets will always outdo yours. The speed at which they get divorced will also hopefully outdo just about everyone.

Email ThisBlogThis!Share to TwitterShare to FacebookShare to Pinterest
Our Labels: celebrity, photography, weddings

Comics and Editorial Cartoons: For Better or For Worse on Yahoo! News

For Better or For Worse is having a series right now that involves the plans for an upcoming wedding. All the joy, trepidation, nerves, planning, memories, nostalgia, fear, stress and commotion --and did I mention joy?-- are being brought into the story. There's the groom-to-be and father of the bride taking a moment away from the commotion to laugh. There's the cherished dress that belonged to grandmother who is there in spirit. There's the younger siblings just trying to avoid being arm-twisted into helping. Everything is very funny and very accurate.

If you're planning your wedding right now, you might take a break and enjoy a few light-hearted laughs and realize they are at your own expense. Also realize that even though you might be stressed out right now, you are creating cherished memories for all time.

See Comics and Editorial Cartoons: For Better or For Worse on Yahoo! News. Just don't take too long! You've got lots of stuff to do!

Getting To Know Your Photographer

I was lucky enough to be born with a former professional photographer in my immediate family. Otherwise, I wouldn't have known what to expect or ask for from my wedding photographer. If you are not in a similar situation and want to be sure to get the pictures that your special day deserves, I've found an article that can help.

Why don't couples spend time getting to know their photographer? Yes, they specialize in wedding photography but every wedding is different. You might have a specific list of shots that are important to you and unless you communicate this to your photographer, he/she might not capture those special moments.

Find out more information and recommendations about Getting To Know Your Photographer.